Outsourcing medical record coding services overseas is often seen as an effective cost-control measure by U.S. healthcare organizations, but the recent experience of six organizations with this approach suggest this might not be the case.

In December 2017, Moody’s Investors Service reported that the overall decline in operating cash flow for U.S. not-for-profit and public healthcare organizations was expected to decrease by 2 to 4 percent over the ensuing

12 to 18 months. This decrease is attributed partly to changes in payment and increases in labor costs. Collectively, U.S. hospitals have experienced median decreases of 2.7 percent in payment and 9.6 percent in cash-flow margins since 2015.a

This trend has prompted healthcare providers to constantly seek ways to minimize overhead and expenses, including reducing labor costs in medical record coding. In October 2016, Black Box Research reported, “Nearly 72 percent of hospital respondents are outsourcing more than half of their coding needs in 2016, up from 53 percent of hospitals before ICD-10 in 2015.”b Here, we address an important question facing healthcare revenue cycle executives: Are the advantages of offshore coding services greater for the organization than those associated with domestic services?

Many companies offer outsourced medical record coding services; an internet search will yield several pages of possibilities. Many of the companies are in the United States and provide the option to select domestic or offshore coders; others are offshore-only companies.

For example, Partners Healthcare (PHC), the largest private employer in Massachusetts, announced Feb. 20, 2018, that 100 employees— the majority of them coders who earn upwards of $40 per hour—were being let go and their jobs outsourced to India. Massachusetts state law requires healthcare providers to keep spending growth to 3.1 percent a year, so PHC leaders are hoping this move will allow them to maintain these margins, because the outsourcing expense is expected to be a fraction of the current amount.d

PHC’s decision to outsource the coding function to India may seem to make sense when one considers the lower hourly wage. Indeed, the cost savings look significant if offshore resources are considered—at least from a high-level, cursory review. However, there is more to the coding process than is readily apparent from a spreadsheet. Recent experience suggests that a deeper analysis is required.

Experience from a simultaneous engagement of offshore and domestic coders for their services from 2012 to 2015 provided some interesting comparative insights into some of the costs, benefits, and risks of domestic coding versus offshore coding. It also underscored the need for healthcare executives to consider other factors beyond the up-front cost to code—whether it is an hourly rate or a per-encounter fee—when considering the option of offshore medical record coding services versus domestic services.During the engagement—which lasted from January 2015 through January 2017 and involvedfive offshore coding companies—six significant patterns in offshore medical record coding services performance were noted. These patterns suggested that use of offshore coding can result in:

The same onboarding, auditing, and training procedures were applied equally to all. Coding accuracy rates, training times, and onboarding times were tracked for domestic and offshore coding services.

To analyze performance by type of facility, the two health systems were included within one category, the two teaching facilities and large tertiary care center were placed into another category, and the small community hospital was listed separately. Three averages were then calculated to identify any differences in offshore coding outcomes by facility type: inpatient accuracy, onboarding, and training time.

The only dramatic difference in offshore coding performance for these three metrics was with onboarding time—the multihospital health systems took longer to onboard their offshore coding partners (see the exhibit on page 4). Despite lack of variances by facility, the data provide a solid benchmark for organizations considering offshore coding services.

Greater differences were noted when comparing outsourced offshore versus outsourced domestic coding accuracy, onboarding, training, and auditing requirements, regardless of facility type, as noted in the exhibit above. Herein lies important time and cost considerations for healthcare revenue cycle executives. Poor coding quality increases payer denials, while additional management time required to onboard, train, and audit outsourced coders increases operational costs. These factors, therefore, are important considerations for any organization that is contemplating whether to outsource coding to an offshore service provider versus a domestic one.

The final step in our analysis was to make a fully loaded cost comparison of these six facilities’ experiences with outsourced offshore and domestic coding services.

COST ANALYSIS: COST PER HOUR FOR DOMESTIC VERSUS OFFSHORE

Cost of coding was determined by comparing services on an hourly basis. The six organizations in this study were charged varying rates per hour or by chart, across five different patient types, from four different offshore vendors. For purposes of this study, $60 per hour for domestic coding and $35 per hour for offshore coding was used.

These study findings suggest offshore coding is a more expensive option than domestic coding due to additional costs of rework, auditing, and lower productivity. Beyond these bottom line calculations, there are also intangible challenges involved when different languages and cultures enter the coding mix.

Blending Languages and Cultures for Outsourced O shore Coding
Managing coders amid varying time zones and languages is very difficult. When working with offshore partners, coding managers are required to conduct meetings at odd hours. For example, in the study described here, training sessions for international partners needed to be conducted at midnight, right as the offshore coders’ shifts were starting. This finding suggests that healthcare organizations considering an offshore coding service should specify training, conference calls, and other communication time preferences as part of the contracting process.

The study also found that email communication often was complicated in attempts to achieve a clear consensus across offshore and domestic teams. Language differences were most notable when physicians were queried for additional specifications as required to properly code cases in ICD-10. This experience suggests physician queries are the most important cultural issue to watch with outsourced offshore coding services.

From an education and training perspective, it was clear the offshore coders generally lacked the years of experience the domestic coders possessed. Moreover, due to time zone differences, managers were not able to catch errors and make corrections as quickly as they could with domestic coders. Finally, accounts also tended to be held longer in discharged-not-final-billed (DNFB) status pending additional coder review or awaiting management responses. Other cultural considerations include transportation, family events, and government holidays.

Family events. Celebration events tended to be extended. For example, a marriage in India resulted in the coder being out of the office for three or four weeks. Traveling back “home” to visit family can be a month-long vacation.

Government holidays. Other countries mandate holidays where coders are not permitted to work, and the international team in the study also recognized the U.S holidays.

These cultural, time zone and language barriers should be addressed during contract negotiations and accommodations made with the offshore provider. Contractual issues surrounding productivity, accuracy, privacy, security, and training also should be carefully stipulated as points for the offshore vendor to address.

OUTSOURCING MEDICAL RECORD CODING: INTANGIBLES NOTED IN THE STUDY THAT COULD POSE DISADVANTAGES 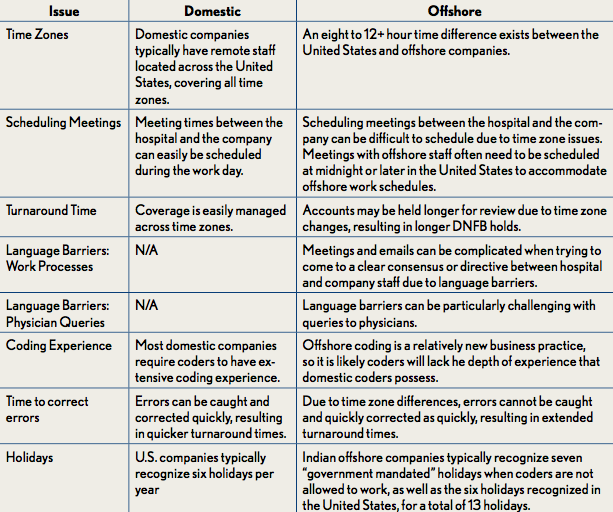 Outsourcing coding services to any vendor, domestic or offshore, carries important responsibilities for revenue cycle executives and health information management leadership. From securing the contract to managing day-to-day operations, there are many service-agreement nuances to consider, including those mentioned above. The following questions are additional components to include during coding partnership conversations and within outsourced coding contracts.

In addition to asking these question, the healthcare organization should request copies of the outsourced coding company’s policies and procedures governing the use of virus protection software and patch management software (which should include provisions ensuring all software is up to date and fully supported), as well as its policies on password management and safeguards.

By mitigating concerns raised by the six hospitals in this article’s study, healthcare organizations can ensure a smooth working relationship and informed comparative assessment between domestic and offshore coding services.